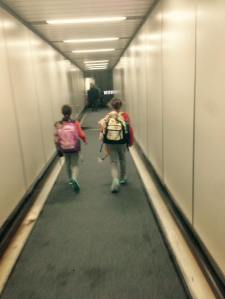 We embarked on the travel, well organized but with much trepidation (well, on my part anyway).

We split into 2 groups..  I knew I wasn’t up for moving 3 kids, 3 animals and 2 adults, across the Atlantic on the same day and leave the house spotlessly clean.

Animals (2 cats and 1 large dog) left a couple of days prior along with an adult and a child. 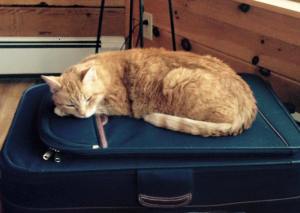 Charlie opting for a suitcase vs. a crate

The process of moving animals to the UK was a laborious task but manageable (and expensive) in the end.  The first move day was filled with anxiety but we chose Virgin Atlantic for animal travel.  Mostly due to the fact they have a phenomenal track record with moving animals and they offer a pre-flight document check to offer peace of mind and also expedite clearance in the UK.

I did, at first, consider using an Agency to help with the all the paper work and process.  After an initial quote of around $4000, i decided i was smart enough to figure this out alone.   With a couple of phone calls/ emails to airlines and the DEFRA contacts, i knew exactly what needed to be done and how.  While I did a good job with all the paper work and process, the UK government did want one additional piece of clarity for clearance of which i was able to provide before we even got to Boston.  Better to deal with it during working hours vs when they land, in the middle of the night.

The pre-flight document check was worth it.  It allowed 100% peace of mind and was confident handing over the animals at Boston.  Note – Virgin technically only offers the pre-flight check if you are on the same flight as your animals.  We weren’t.  I emailed all docs anyway and followed up with a call.  No-one questioned it and we moved through the process anyway. Always worth trying if you are booked on Virgin and they were incredibly helpful and friendly. 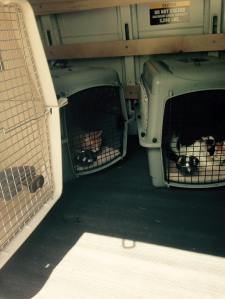 Loaded up and ready to go….

For anyone that has never shipped animals before, the process and handling wasn’t as traumatic as i thought.  I admittedly got upset loading them into the crates at the house.  By the time we got to Boston, I was more confident with the hand off.

Animals are not allowed to be sedated for the journey.  I forgot to give the cats additional Rescue Remedy but was able to get the dog to chug another dose before I handed him over.  Not sure if it works but was prepared to give it a shot.  In my haste i also forgot to spray the kennels with lavender spray.  I asked the big burly cargo guy to do the honors….he obliged and it was amusing to watch him spritzing the crates.  Again, no idea if it was calming but I gave it a go 🙂

The animals flew direct.  A swift 6 hours so not too bad.  I did wonder what they thought of the flight experience…..a sensation they’ve never had before.  It broke my heart when I flew a couple of days later, knowing the noises and motions they would have gone through.

The good news is, by the time my husband and eldest arrived at Heathrow, all 3 animals were relaxing in the Animal Reception center.…fed and watered and ready to travel to their new home.

Just 3 days later, i think we can safely say, they are settling in nicely…. 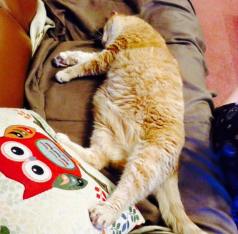 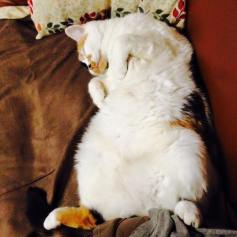 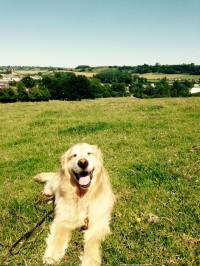 I followed on with the twins, 2 days later.  Allowing for final packing and cleaning of the house.

The ‘people’ of the family all traveled with Icelandair.  A decision driven by cost.   Less than half the price of a Virgin ticket but it does require a change in Reykjavik.  A good decision.  The kids are all old enough to cope with the change and adds only an addition couple of hours to travel time.   My biggest challenge was handling 6 large suitcases…almost solo….as the twins didn’t have the strength to haul them around.  They became pretty savvy with a luggage cart by the time we passed through customs at Heathrow!

So we have arrived in England.  We are now settling into life as an English family.  Currently we are in Yeovil, Somerset while we look for a rental in our desired town of Sherborne, Dorset!