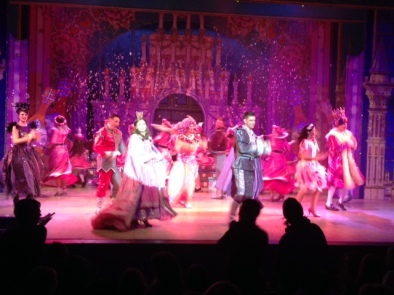 A first for the kids…Pantomime!

British culture at its finest.

I couldn’t wait to take them.  It was difficult to explain the concept and they really had no idea what to expect but in true British fashion, it didn’t disappoint.

The loved every minute of it.  Especially the shout out from the Dame at the end…welcoming them to their very first panto.  Naturally, the Dame followed up with all sorts of suggestive comments which made the grown ups giggle and the kids confused but they were thrilled non the less!

I have to be honest, we were at a relatively small production in Yeovil.  Sleeping Beauty at the Octagon Theatre.  I was hugely impressed with the cast, script and production.   I would highly recommend it but sadly, the last performance has passed 😦  Maybe next year…

For anyone unfamiliar with panto, this article by the BBC explains it very well…Why Pantomime is such a British Affair

For a first, and most likely their only Panto, it was perfect….Oh yes it was!