As mention before we were staying in Agios Georgios in the North West of the island.  We were keen to explore neighboring towns and one that became a fast favorite was Afionas.   A short drive from our villa and judging by the guest book, some folks would walk over for dinner.

The village/ town is small but so pretty.  The main road in leads to what seems to be a dead end.  We tried to navigate a car one day but found it too tricky!  However, this road will lead to a path/ beach.

There ate alley ways and paths through the buildings laden with brightly colored flowers that led to some lovely restaurants. 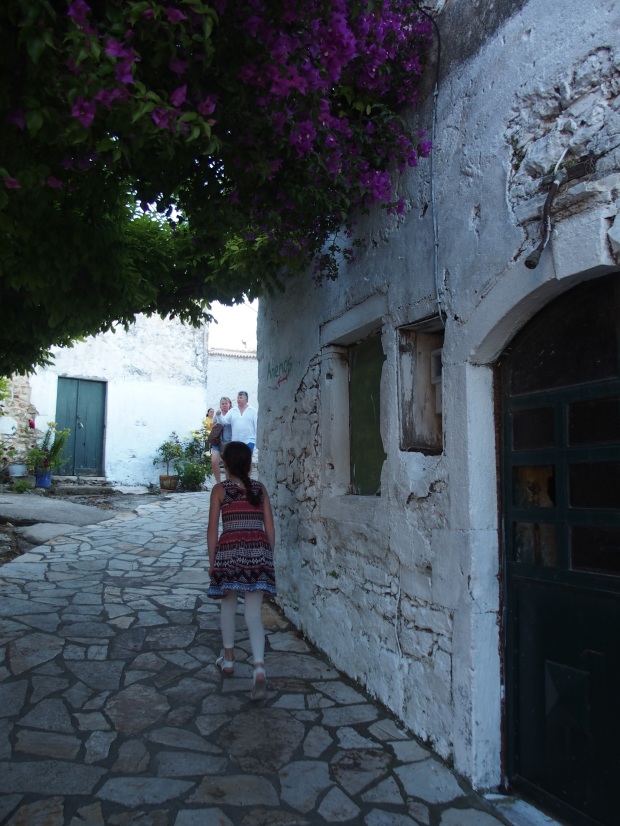 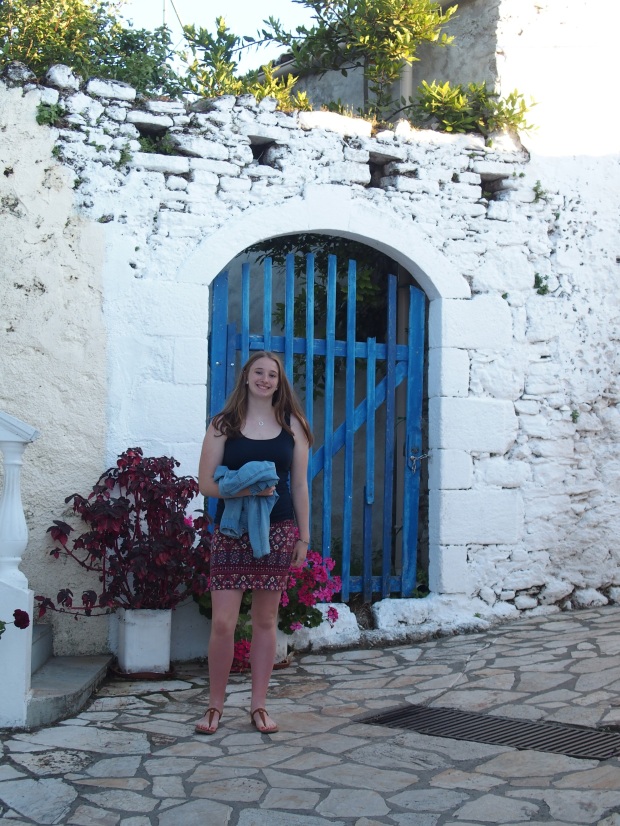 Our favorite was Anemoes Taverna.   Set on the side of a hill with  spectacular Sunset views.  The restaurant offers 2 outdoor terraces and we easily got a table.  I do think in peak season, booking would be recommended.

Food was great too.   Probably the best meal we had during our stay in Corfu.

Another restaurant we tried in Afionas was 3 Brothers.  We had read good things about this restaurant but were disappointed with it.  It lacked the charm of Anemoes and food was just standard for tourists.

Another bonus to Afionas was the beautiful beach.  Be warned, this is a serious hike to get to.  Sturdy footwear is better than flip flops (!) and take water.  Pick your timing wisely as in the heat of the day walking down to the beach s tough enough but back up to the town can be a killer!

The rewards are the views and quiet beaches.

View of Agios Georgios from the trail in Afionas

Part way along the path is access to a restaurant Dionysis.  We stopped here one day for drinks.  Again, terrace seating and lovely views.

As mentioned in my previous post, beaches aren’t great in Corfu and the quality of the beaches in Afionas could be better.  However, the setting is gorgeous and we enjoyed the quiet snorkeling opportunities. 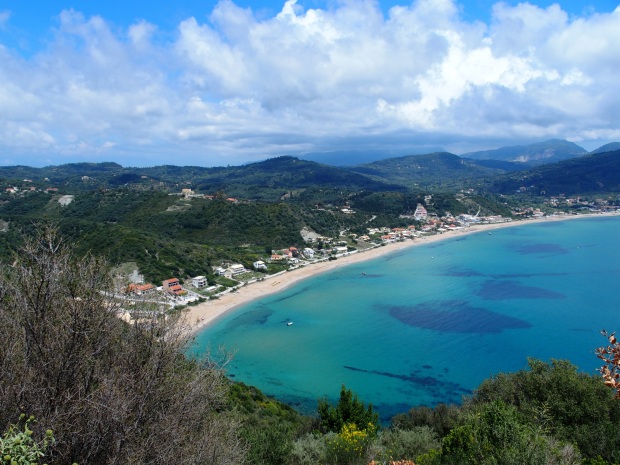 Its been quite a while since I last posted.  Not due to nothing to write about but mostly due to being very busy and on the move.  I have a lot to catch up on so starting with a post about our recent trip to Corfu.  I’ll write a couple of posts about the trip but not in any particular order of how we spent our time, more to share a few of our experiences.

We headed out to Corfu for half term holidays.   We booked a last minute deal (2 weeks prior), really only using the long term weather forecast as our guide on where to go. Seems odd but we were desperate for guaranteed sun and hot enough to use a swimming pool.  i.e we wanted a proper ‘holiday’.

You don’t really get the typical last minute discounts anymore but we still felt like we got a good deal.

We flew from Gatwick to Corfu direct with Germania.  We had never heard of the airline but were pleasantly surprised with the service.  They are a German owned airline and my guess is do mostly charter holiday flights.  They were on-time, clean and efficient.  The flight is short (under 3 hours) yet they still served drinks and food at no extra charge.  While it wont win any awards on Masterchef, its a welcome break from paying for drinks and snacks on flights now.

Arriving in Corfu, we headed straight to our car rental pick up (included in the package deal).  Car rental for us and location of the villa was a must.  Plenty of folks seem to be piling onto buses to get to more populated resorts but we were a little off the beaten track.

I apologise but i just don’t recall the name of the car rental place….just a short distance form the airport.  They had lots of nice looking cars in the lot…..except for one absolute junker….yep – that was ours.   It was shocking – a clapped out Megane.   Scraped up, dinged, rattly, A/C barely working, fuel gauge faulty…and final days, the boot wouldn’t close…  We asked for a replacement but they stressed they had no other so we were stuck with it.   Not ideal but we were to make do!

We were quick to learn that perhaps it was for the best (to have a junk car).  The roads in Corfu are one of the 3 statues:

By day 3, the car rental company had called us and said they had a brand new car for us.  They were happy to make the hour long journey to deliver it to us.   We declined.  We opted to stick with the junker and boy were we glad we did.  We drove on some pretty bad roads for the rest of our time there and there is no way a new car would have come out clean!

So our resort area was Agios St Georgios (north).  There is a place of the same name further down the South West coast.  We were North west.

Its a small resort and being early June, not 100% open for the season yet.  However, when fully open, its not a place with lots of bars and nightclubs so it would suit us just fine regardless.   Corfu doesn’t have great beaches either.  Either rocky/ shales, small etc.  Water is clear and ‘pretty’ as the kids say but beaches on the whole are not great.  Agios Georgios though has the best beaches in Corfu.  A very long stretch of nice sandy beach.   Despite this being on our doorstep, we only visited the beach once.  Mostly because the water here was cooler than others….

First steps on the beach! 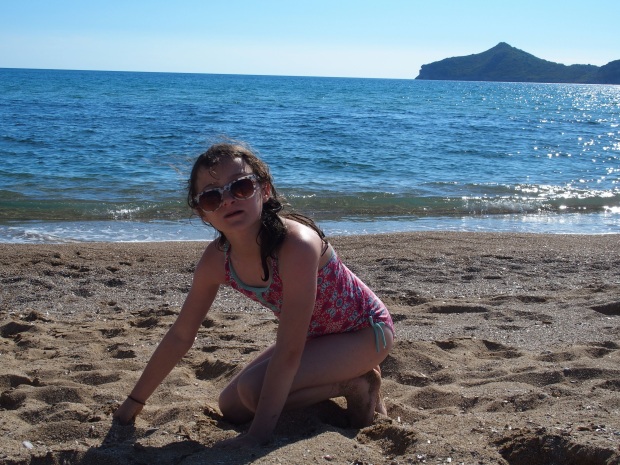 Our villa was the biggest hit of our deal.  Not sure how we were lucky enough to land it but we did.  Villa name was Hellyhunter.  An unusual name but it was named after someones father (British family).  The villa was large and immaculate.  Almost a shame we weren’t sharing it with others as it begged to have more people and a party!   The villa sleeps 7/8, 3.5 bathrooms, fully equipped kitchen including dishwasher and washing machine, 2 large BBQ’s, large pool, amazing views and the owners made sure that no detail was left unnoticed. 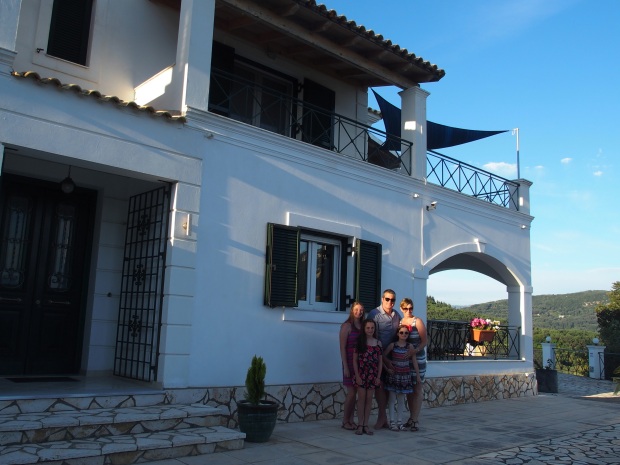 View from one of the terraces at the villa 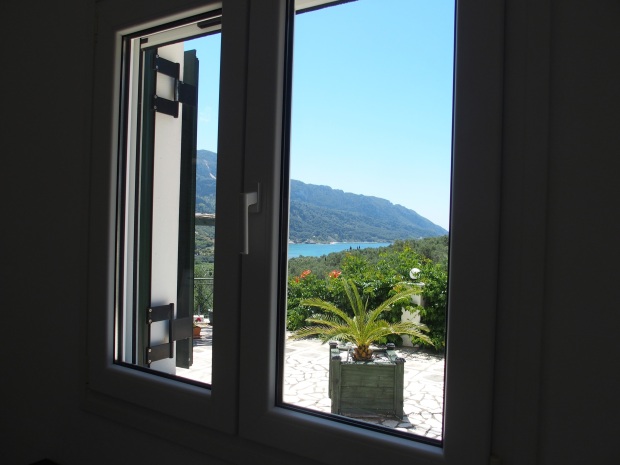 The house had a decent proximity to the town/ ocean but we opted to walk only once.  We also debated whether the villa was the best on the island…possibly!  With that said, the restaurants in town all offered the same type of fare and for us, not always enticing so not actually leaving the villa some days was easy and welcome.

A quick note on the weather – early June proved to be perfect for us.  The weather was sunny most day, a comfortable temperature but also enjoyable to swim in the pool.  Mosquitos can be bad there but this early in the season, there are very few so we had no need for repellent or plug in repellents (plenty at the villa).  If you’re looking for a time to visit the island, then June it should be!

Next post – some more about surrounding areas and our exploring!

My workout this morning was more difficult than hers
Solstice on the water
Low tide
24 miles on the Cotton Valley Rail Trails in NH. Beautiful scenery in gorgeous June sunshine. Now to rest my weary legs…
Enjoying a quick trip in the @winnebagorvs
Such a beautiful day 😍
The weather this week has been perfect. Margot approved!
Spring nights on the water
Siblings…😍
Follow Always Home on WordPress.com